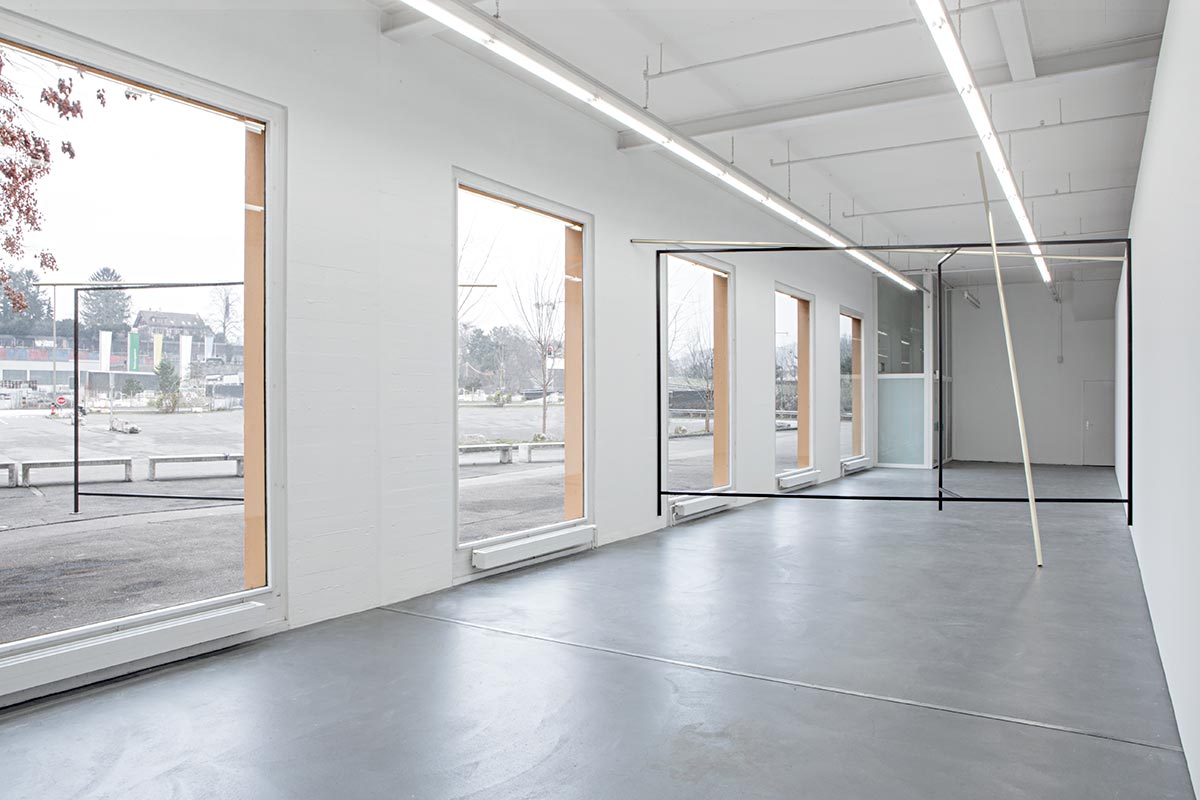 Endless Nameless
An interview between David Keating and Curator Ines Goldbach, Director of the Kunsthaus Baselland.

Ines Goldbach: David, you have developed two works from the spatial relationships in the Kunsthaus Baselland, one of which can be experienced outside, one in the interior. In a kind of precise doubling. Both are large-scale sculptures composed of steel and brass, identical in their structure and material nature, which describe a line through the architecture of the building and the design of its forecourt. How did you conceive of the sculptures, as they are very much connected to the Kunsthaus?

David Keating: When I first visited the Kunsthaus the idea of making two related works, one indoor and one outdoor was immediately appealing to me. I already had the idea that the works should develop a conversation between conformity and rebellion within the context of the architecture of the Kunsthaus, and from that point I started building models and making drawings of possible works until interesting forms started to develop.

IG: Why did you choose the materials steel and brass for both sculptures?

DK: In many of my works I like to focus on the specific properties of materials that can be brought out through their interaction. Steel and Brass are two very different metals. The former is a relatively stiff construction material and the latter soft and malleable, but both materials come with all sorts of associations that I find interesting when juxtaposed. Mild steel essentially made the age of mega architecture possible and the look of our environment has been de ned by it. Brass, on the other hand, is a material that has nostalgic qualities and even though you could call it the poor man’s gold it is suggestive of all sorts of transcendence over the prosaic. Usually – in any type of metal construction – it is best not to mix different metals together as on an atomic level their molecules vibrate in different ways. On this level I also find the juxtaposition fascinating, particularly because it also reinforces a struggle for reconciliation between different elements within the works themselves, which echoes the themes of conformity and rebellion developed in the overall installation.

IG: The outside sculpture is fixed to the ground and stands on three points, plus the brass also touches the ground. The inside one appears to be floating and is fixed to the walls. It looks to me as if it somehow negates its own weight. Why did you choose that difference?

DK: I am fascinated by ideas that echo, like repeated phrasings in music that evolve over time. Repetition is an integral element to almost any form of language; it’s a structural necessity for developing understanding, so to me it always seems natural that it should be somehow entwined within the form and subject of a work. Seeing it in this context, jamming the indoor work against the walls and raising it, was a way to echo the play of weight and balance within the work itself, whilst in the overall installation I intended the repetition of the works as a means of forcefully highlighting the different ways in which they relate to their environments.

IG: The theme of a series of your preparatory works is the question of how much, or how little, surface and materiality a sculpture needs in order to gain presence and hold its ground within an interior but also an outside space, a question that is key for you. This is also about showing how a sculpture can further strengthen its inherent architectural space and enable a more precise experience of its characteristics. Your works are always about formulating and opening a space for the person within it, not about possessing it. What kind of difference does this make for you in the realisation of an outdoor or an indoor piece?

DK: Making sculpture for me involves exploring a triangulation of relationships between form and materials, environment and the expectations of an artwork for a given context. Generally, I’m attracted to artwork that allows the discordant and the harmonious, negative volumes and positive volumes to all have a place. Ultimately, when you start to focus on aspects like negative forms – the spaces in between where you put something – you are highlighting the exhibition context too. Realising an outdoor work, you are faced with a whole variety of different visual stimuli that don’t exist in the white cube, but I wouldn’t argue that it’s less neutral than in the white cube; in both environments the work has a different kind of fight for recognition on its hands. At the Kunsthaus it was an ideal situation for me to reconcile two tenets of my work that for most artists generally remain separate, both having their own different restrictions. Being able to realise an outdoor and an indoor work that are conceptually connected allowed me to feel like I was breaking down the restrictions that are normally placed on each situation. In some way this happened without me consciously realising it. Maybe it is the nature of the double? Each work gains strength through its duplication in the other environment. In this way the installation at the Kunsthaus very much toyed with the notion of “fitting in”, and despite the indoor work being deliberately too large for the space, their doubling serves to shift the subject of the works away from their formal attributes towards questioning the nature of the conversation between an artwork and its exhibition context. 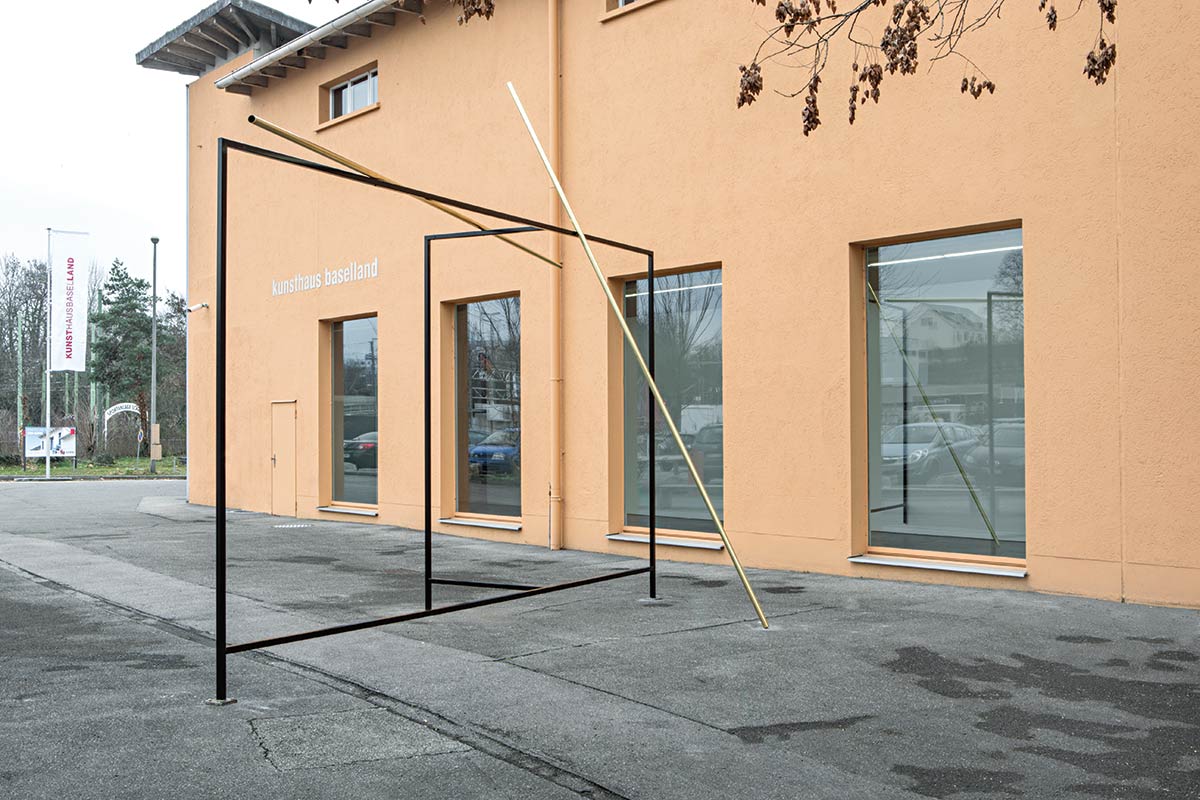 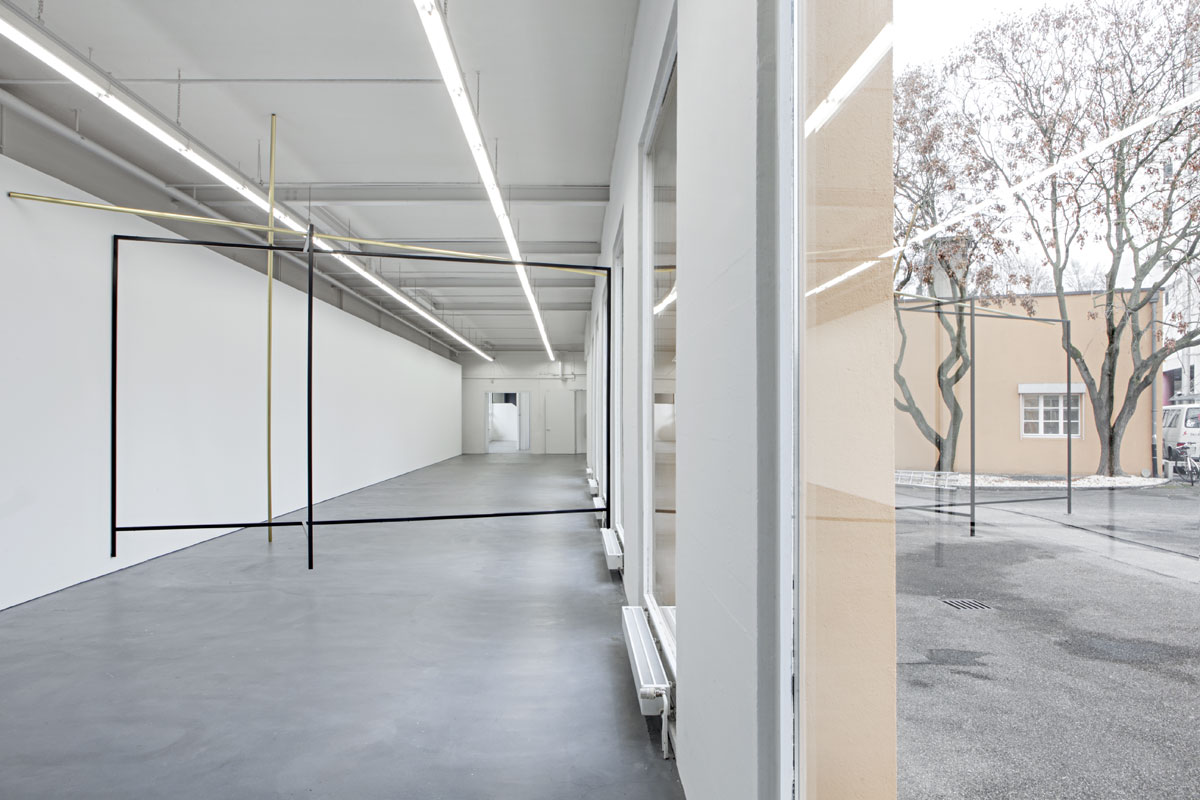